Working From the Road

To help understand my work schedule, it helps to know what I actually do for a living. I’ve been in tech for about 13 years now. I started as a project manager then changed to programming in 2009. I now work at Heroku – a “platform as a service” (PaaS) company. I work on the Support team and help developers (usually Ruby on Rails) with their web applications.

When considering life on the road, I considered doing contract work. However, I’ve always been a little scared of full-time contract work: mainly for the possibility of work drying up, but also for the fear of losing benefits like healthcare. So I decided to apply at 3 of my favorite companies that I knew had strong remote cultures: Basecamp, Github, and Heroku.

Basecamp wasn’t hiring at the time (thanks for the kind reply, DHH), but I managed to get interviews at both Github and Heroku. The Github position wanted me to travel 50% of the time – which meant needing to leave my family alone on the road. on the other hand, Heroku had two open positions: a frontend job and a support job. Support wasn’t interesting to me at the beginning, but I was swayed when I learned how the team worked. Most of my work is ticket-based, which allows me a ton of flexibility with my schedule – something that works great with this remote lifestyle (more on that later).

“How do you get internet?” is usually the first question I’m asked. While I don’t always need fast internet, I always need some internet. I did a lot of research when we started out and found that Verizon has a much larger footprint in the U.S. than other providers – especially in more remote areas. We both had phone contracts on AT&T, so we thought we’d start with a Verizon data plan (with hotspot) and use AT&T as a backup. After the first year, we’d never had an instance where we had to fall back to AT&T, so we’re now in the process of switching over entirely (to bundle some savings).

We started with a 12GB plan, which surprisingly worked pretty well for the first few months. It definitely took a lot of effort to stay under the limit. I ran a “bandwidth monitor” on my laptop and didn’t allow my kids or wife to get onto my “work network”. I eventually upped us to 20GB to avoid overages.

However, the holy grail of road life is an unlimited data plan. I know quite a few people who have managed to find unlimited plans on Ebay, where they work out a deal with the plan’s owner to have it transferred to them. We were lucky enough to snag an unlimited plan from another full-timing family. They were going international for awhile and were kind enough to lease the SIM card out to us. I have no idea what we’ll do once they come back to the states, but I’m not going to worry about it now. In the meantime, Netflix and HBO Now for everyone!!!

If internet is a must for work, don’t forget a signal booster! In most places, we were able to get our signal strength up – sometimes from 1 to 5 bars! We loved the weBoost Drive 4G-M. Other folks we knew used the less-powerful cradle version.

We’ve had two different trailers our first year on the road and neither really had a great spot for a typical desk. Furthermore, I wasn’t really too excited about carving out a whole section of our limited living space for a desk. I much prefer to work outside as often as possible. If driven inside because of weather, I’ll opt to work at the dinette or couch.

Outside, I’ll work from our camp chairs, a picnic table, or even the tailgate of our truck as a make-shift standing desk. I try to work outside as much as I can – there’s just nothing better than sunshine and fresh air.

I know others who have the spare space for a desk setup – usually a standing desk to preserve floor space. But the outside/dinette/couch option usually works fine for me.

People forget about this one. :)

I’ve got a 15” Macbook Pro (thanks Heroku!). I originally had a Cinema Display, but it took up a huge amount of room and an even larger amount of power. To preserve power, I try to only charge my laptop during daylight hours to take advantage of our solar power. The solar controller will quickly replace any power routed to my laptop battery versus pulling from our house batteries at night.

My MBP draws about 7amps while charging off our inverter. Some other nomad friends swear by a DC charger for the MBP, but I’ve had two burn out on me and won’t be going back anytime soon. (your mileage may vary). So today was a good example for power usage:

Today is a little cold and windy so I’m working from inside, which means I’ll stay plugged in. But normally, I’d be outside at some point. If I’ve got a full battery, I can work from anywhere nearby with my camp chair. If I’m desperate for power, I’ll run an extension cable outside from the inverter. :)

For more info on our solar setup, take a look at our RV Remodel post.

So what’s a “normal” day look like? After a year on the road, I’m not quite sure yet! A big part of this lifestyle is actually about handling frequent change (pros and cons). That being said, I’ll try to give you the best summary I can think of.

While this is a “typical” work day, it probably only happens 2-3 times a week. The other days can vary greatly. Maybe I’ll head to a coffee shop today. Or maybe we’ll head to a National Monument or local park for the morning and I’ll make up those hours in the afternoon.

One of the best parts of my job is my ability to time-shift when I need to. For example, we camped out near Grand Tetons National Park last spring. I was planning to start work early each day so we could do some hiking each afternoon, but the forecast called for rain showers each afternoon. So we decided to call an audible. We decided to head out each morning for some hiking, then come back for lunch and work.

Being able to shift my day around like that is a brand new experience for me and one I’m incredibly grateful for. I know a lot of other guys that have similar flexibility because they do contract work, which can usually be done asynchronously.

Working (not) From Home

There are still some days that working “from home” just isn’t working. I’ve got a lot of calls to make and the internet speeds are terrible, the kids are too noisy, or the heat outside is too unbearable. In these cases, I’ll drive into town somewhere and find a coffee shop or library. Public libraries are fantastic places to work while on the road. Even tiny towns will have decent WIFI and are quiet enough to work in peace. If I need to be on a call, I’ll find a “study room” or sit just outside the building so I can still get WIFI.

Most parts of my setup are pretty common, while others are pretty unique. I know my work affords me quite a bit of flexibility with my time – something I don’t take for granted and something I always take advantage of when I can. If I wanted to be cooped up inside all day, I would never have bought this trailer and hit the road. So we try to structure our days around enjoying the outdoors as much as we can. I still have to pay the bills though (even on the road!), so it’s always helpful to remember that this lifestyle isn’t all roses and rainbows. But I’ll take a camp chair office over a cubicle any day. 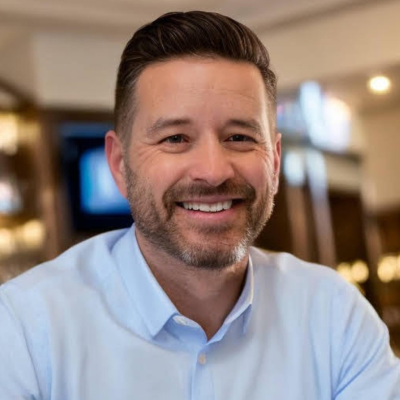